December 1, 2019 By Vincent E.M. Thorn in Uncategorized Leave a comment

For those of you who don’t know, JordanCon is an annual SciFi/Fantasy convention in Atlanta, Ga that originally began as a Wheel of Time-centric convention. Said convention has a fantastic Writer’s Track which has hosted such guests as Patrick Rothfuss, Saladin Ahmed, and Brent Weeks. Starting in 2019, the convention began releasing an annual anthology comprised of stories by guests and attendees of the convention’s Writer’s Track. 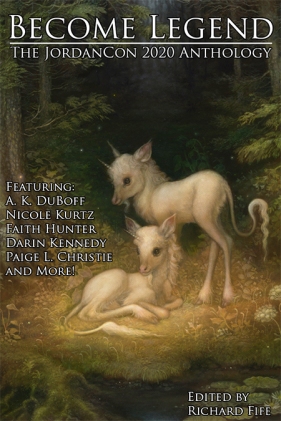 This year, the anthology includes stories by great writers like Darin Kennedy (Fugue and Fable), Faith Hunter (Jane Yellowrock), A. K. DuBoff (The Candicle series) and Vincent E. M. Thorn — yes, I did just refer to myself in the third person, and I make no apologies.

This book contains 20 different stories centered around the theme of Legends, including The Witch Hunter, a short story set in a world where many legends are dying.

Pre-order today through March 25! All proceeds of this Anthology will go towards supporting JordanCon’s 2020 charity, and they always rally behind a good cause. Last year (or, I guess this year since 2020 isn’t quite upon us) they donated to the Hospice of Mercy in Cedar Rapids, Iowa.